The Pharaoh of the Exodus: Neferhotep. Pharaoh of the 13th dynasty. Following his death, the Hyksos were abe to invade Egypt with very little resistance.

A statue of Neferhotep. Last Pharaoh of the 13th Dynasty, The Pharaoh of the Exodus. The Pharaoh who refused to let the Israelites go. His mummy has never been found because it was at the bottom of the Red Sea along with the Egyptian army. Following his death, the Hyksos were able to invade Egypt with very little resistance. There were a number of other Pharaohs in this Dynasty but they only reigned for very short periods.

Sobeknefru adopted Moses. Moses had to flee to Midian at the age of 40. Sobeknefru had no other children to inherit the throne. When she died, the 12th dynasty came to an end. 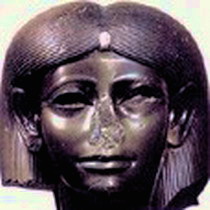 Sobeknefru. Daughter of Amenemhet III. The First Queen of Egypt. Foster mother of Moses. Last Pharaoh of the 12th dynasty of Egypt. 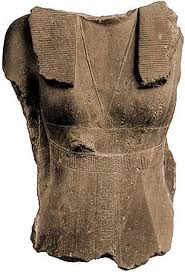 Sobeknefru - The daughter or sister of Amenemhet III. The Princess who found baby Moses in a basket amongst the reeds of the Nile. Her father/brother Amenemhet III had directed the Egyptian midwives to kill all Hebrew children. As she had no children of her own, she adopted Moses and raised him as an Egyptian. When Moses fled to Midian, there was nobody to inherit the throne. Sobeknefru became the Queen of Egypt after Amenemhet III died. She ruled for up to 8 years. When she died the 12th dynasty Ended.